A few days ago, while looking for some family photos for my brother, I found this photo.  Yes, I know I don’t look a lot like this now but it got me thinking. 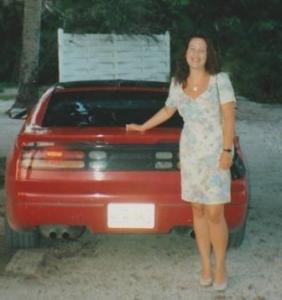 I wasn’t in the first flushes of youth.  I was 25, nearly 26, and a single parent with a demanding and stressful job.  But I was thin, fairly pretty (or so I’m told) and had the world at my feet.

I decided this was the perfect photo to inspire me to lose weight – so I stuck it to my desk. I’ve also put a really unflattering fat one on the fridge door but after sharing my weight there was no way I was posting that on here

Now, I’m pretty realistic.  I’m never going look like I did when I was 25.  And if I’m honest I wouldn’t want to be that thin now.  After all at nearly 50 it’s a fine balance between fat and wrinkles.  But I did think it would be a good motivational tool.

Then I started thinking about what else would motivate me.  And that’s when I came up with £’s for Pounds (I might even create a # on Twitter – if I can figure out how).  And here’s how it works:

For every pound I lose I will donate £1 to the Charlie Cookson Foundation.  And I’m asking everyone else to support me by doing the same if you think I’ve done well one week.  I know money is tight so I don’t expect anyone to do it every week, but, if once in a while, you’ve got a £ or 2 to spare (I doubt I’ll lose more than that in a week) then please do donate at www.justgiving.com/5iftyby5ifty

Oh and I nearly forgot.  Because I don’t want the Charlie Cookson Foundation to lose out if I don’t lose weight – I will donate £2 for every pound I gain.  So keep an eye out tomorrow for my first weigh-in to see how much I’ve lost (or not) and how much I’ll be giving to charity.