It’s been an up and down week diet wise

After last week’s weight loss I started off really positive and upbeat – convinced I would lose much more this week.

On Wednesday I went to a funeral where tapas was served.  And me being me I went for the unhealthy option – chorizo.

They call it a share bar – but not in my world

By Thursday I was back in controls – well sort of – I didn’t have more chocolate but couldn’t resist a piece of cake at work.

Friday was much easier then Saturday arrived.  And this week that meant a night out with the lovely Joanne Weightman

And anyone who knows me will know that doesn’t just mean a couple of bottles of prosecco but also some rhubarb and ginger gin – delicious but loaded with calories – not good for the diet. 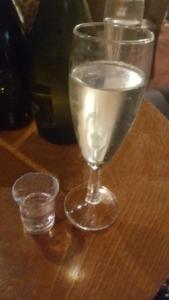 Prosecco with rhubarb and ginger gin – mix together for Edinburgh Fia

But yesterday the sun was shining and I was ready to get back on track.  After spending the morning listening to former Foreign Secretary David Miliband talking about the EU referendum 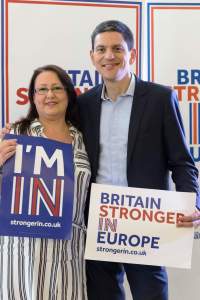 I spent the afternoon in the garden and ate really healthily.  But I should have known it wouldn’t last.  And sure enough at about 8 o’clock I was feeling really peckish and decided to make myself an omelette.  Now a two egg omelette is only 140 calories (I use spray oil) so that wouldn’t be too bad.  Except I made a 4 egg omelette.  And then I added some cheese, the lower fat kind, but cheese non the less.  Oh and then I decided a nice dollop of chilli mayo would make it even better.  So that was yesterday’s diet ruined as well.

So after a week of up’s and down’s I wasn’t sure whether my weight would go up or down.   And the result is………. 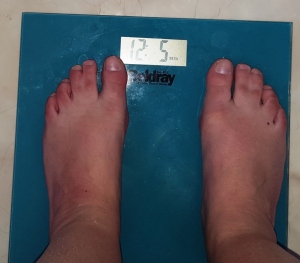 Up or down? It had to be up this week

If you’d like to commiserate with me on my weight gain or encourage me to get back on track then please add to my £’s for pounds at www.justgiving.com/5iftyby5ifty