Yes, that’s what I’ve had this week.  Plus some cake, a little chocolate and a lovely lemon dessert!!!  To say it has been a bad week is probably the understatement of the year.

It all started so well.  I was sticking to my diet which is really just based on counting calories and trying to keep fat and sugar content low.  But then at the end of the week a trip to Bristol via London meant it all went wrong.

After a particularly difficult journey we arrived in Bristol at nearly 10 o’clock on Thursday night.  And when you check into a hotel at that time there isn’t a whole lot of choice on things to eat and if I’m honest I really just needed comfort food.  So I went for the leek and potato soup followed by a venison burger.  In my defence I drank water and didn’t eat the chips and said no to the dessert so was determined to get back on track on Friday.

And Friday started well.  After enjoying fruit and yogurt for breakfast we headed off to Stonehenge and I was sure I’d be fine for the rest of the weekend.  We headed back to the hotel for lunchtime and the start of the UNISON business we were there for.  And again I did pretty well but from there things went down hill.

You see we were celebrating one of my very dear friends sixtieth birthday and I’d brought a cake and a bottle of prosecco – so yes it was all my fault.  And instead of just a small toast I invited everyone to come to my room at the end of the meeting to celebrate with Maggie and of course everyone brought a bottle. So a couple of drinks and a slice of cake later we headed down to a dinner of chicken in creamy mushroom sauce. But I didn’t have any chips and gave my dessert away.

Saturday started with me thinking it probably wasn’t too bad and I was good at both breakfast and lunch but then we decided we needed to finish our celebrations (and the left over prosecco) with another little celebration – once again in my room.  While I had the healthy option for dinner and pineapple for dessert unfortunately I decided to carry on drinking.  Because we all know prosecco is calorie free and must be one of your five a day as its made from grapes – don’t we? Well no actually, not really.

And my biggest problem came the next day.  Because whenever I’ve had a few drinks I wake up starving and have little willpower to resist food.  So following a breakfast of sausage, cheese omelette and beans and mushrooms (because at least they’re healthy), I went on to have a traditional Sunday lunch (including Yorkshire pudding and lashings of gravy) followed by not one but two lemon possets (made with cream but served with a strawberry) before setting off for home.

About a third of the way back we stopped of for a comfort break at what I can only describe as the most tempting services in the world for a very tired and hungry me.  It had a farm shop and a very delicious Beef and Venison pie was the order of the day.

As I was no longer driving I decided to have a little sleep to refresh myself and try to get back on track.  But it wasn’t really to be because after dozing for a couple of hours I woke with a craving for chocolate.  And there in the passenger door was half a bag, a large bag that is, of maltesers that my co-traveller had kindly left there on the journey down.  And I’m afraid I had no choice but to eat them!!!!

When I arrive home I went straight to bed knowing this morning’s weigh in was going to be a disaster.  So as I stepped on the scales I looked down with baited breath to see just how bad it would be.  And the result is……………. 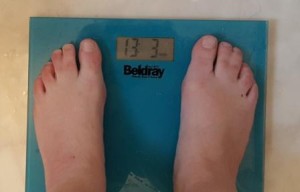 1 pound on – it could have been so much worse

I can hardly believe I’m saying this but I’ve only put 1 pound on. Not the best week in the world and it could certainly have been a whole lot worse.  So from today it’s time to get back on track because I’m not going to get away with this again.

If you’d like to commiserate with me on my weight gain or encourage me to get back on track then please add £’s for pounds at www.justgiving.com/5iftyby5ifty

One thought on “Winners lose – Week 4”